A basic guide for the study of the principles, structure, processes and functions of the Federal government of the United States.

What Are Primary Sources?

The Library of Congress provides handouts that explain why & how to use primary sources. 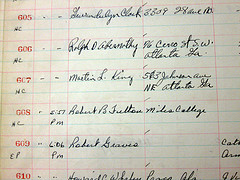 This is a photo of a City of Birmingham warden's docket from April 12, 1963.  Image from the Archives Department of the Birmingham Public Library.

Listed here are the names Ralph D Abernathy and Martin L. King, arrested for demonstrating without a permit. During his confinement, King wrote his famous Letter from the Birmingham Jail.